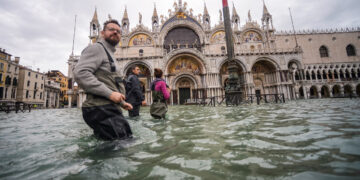 To combat a growing flood risk, Venice, Italy, has spent billions of euros to build three barriers that can temporarily close off the lagoon surrounding the city from the Mediterranean Sea. Now, scientists are reporting that by blocking the stormwater that causes floods, the barriers also prevent salt marshes in the lagoon from receiving vital sediment, which ultimately may hinder their ability to stay above the rising sea level.

The findings offer a cautionary tale about the unexpected impacts of flood protection and the need to maintain the natural dynamics of ecosystems, says Rusty Feagin, a coastal ecologist at Texas A&M University, College Station, who was not involved with the new research. “These engineering gate-barrier structures are multiplying around the world, and Venice is a great harbinger.”

As a low-lying island city surrounded by a lagoon, Venice is especially vulnerable to flooding when storms hit during high tides. After a record-breaking flood in 1966, the government began to plan ways to prevent further damage. The long-delayed result: a barrier called MOSE (an acronym in Italian for Experimental Electromechanical Module, and a nod to the biblical prophet who parted the Red Sea), which consists of submerged gates at the three inlets to the Venice lagoon. When storms begin to raise the water too high, large panels emerge to close the inlets. Construction started in 2003 and costs are estimated at more than €6 billion. The barrier was first activated during a storm in October 2020.

This was good timing for Davide Tognin, a Ph.D. student at the University of Padua. He had been studying how sediment gets deposited on marshes in the Venice lagoon. Sediment is vital, because it provides nourishment and anchorage for plants. Over decades to centuries, as it accumulates, the material also helps plants keep up with rising sea levels. Tognin and his colleagues wanted to know how much of this sediment lands on the marsh from Venice’s gentle tides and how much arrives during storms.

Beginning in October 2018, Tognin measured the accumulation of sediment in 54 shallow plastic containers at three salt marshes. The marshes were in different kinds of locations—close to the inlet, behind barrier islands, and near shore—to check whether various wave patterns might change the sediment delivery.

“We wanted to have the big picture of the whole lagoon,” Tognin says. Over the next 39 months, he collected 1446 samples. When the weather was good and the tides normal, there was no sediment in the containers or just a few grains. But a storm could inundate the marshes with 50 to 100 centimeters of water and leave up to 5 millimeters of sediment behind, he found.

All told, storms deposited 70% of the total sediment on the marshes each year. But after the barrier began to operate, the annual rate of sedimentation at the three sites fell by 25% on average, Tognin and colleagues report online today in Nature Geoscience. This decline is surprisingly large, they say, given that the barriers were only closed for about 70 hours per year.

Those figures matter because the marshes are building up vertically at only about 3 millimeters per year. Meanwhile sea level has been rising in the lagoon by 2.5 millimeters per year, a rate likely to grow because of global warming. The loss of sediment from the closures of the barrier would stunt the growth of the marshes by 1.1 millimeters—enough that they might slowly drown, even at current rates of sea level rise says co-author Andrea D’Alpaos of the University of Padua. “It’s a very important millimeter for the marshes,” Tognin says.

Coastal wetlands that experience small tides, as in the Venice lagoon, seem to be especially vulnerable to sea level rise, says Tom Spencer of the University of Cambridge. To make matters worse, the salt marshes there are already starved of sediment, notes Zoe Hughes, a coastal geomorphologist at Boston University who was not involved in the research. Five hundred years ago, Venice diverted rivers that had been flowing into the lagoon. The rivers carrying sediment that helped keep the marshes healthy were also filling up the waterways and hindering the passage of ships. Then, in the 20th century, jetties built at the three inlets to the lagoon altered the currents so that the tides regularly remove sediment from the lagoon.

Feagin notes the study was relatively brief and that it’s difficult to get a comprehensive assessment of sedimentation, which can vary a lot from marsh to marsh. But co-author Luca Carniello, a coastal scientist at the University of Padua, is confident of the results. “It’s a precise picture of what is happening now,” he says. The researchers have continued to monitor the sediment traps and the new data are consistent with the findings in the paper, he and Tognin say.

So what should be done to help the marshes? It’s possible the operation of the barrier could be modified to lessen the impact, the authors say. By delaying its activation until water is 20 centimeters higher than the current threshold, only 10% less sediment would be deposited during storms than before the barrier was constructed. It might also be possible to only close certain gates during particular conditions, Carniello adds. Another option is to add more sediment from other sources, such as dredges or by diverting sediment-laden water from nearby rivers. Such approaches together might extend the life expectancy of the marshes, Tognin says.

The barrier is essential to protect Venice at the moment, but a larger vision is missing, says Jane da Mosto, an environmental scientist and executive director of We Are Here Venice, a nongovernmental organization that promotes understanding of Venice’s fragile ecology. “Everybody in Venice is desperate for some kind of strategy to be articulated and implemented.”

Longer term planning will also be important, says co-author Marco Marani of the University of Padua. Floods in Venice have become more common in the past 30 years, a trend that will continue as the ocean rises. More frequent closures of the barriers will not only starve the marshes of sediment, they will also interfere even more with ship traffic and obstruct the healthy circulation of water in and out of the lagoon. “Here in Venice,” Marani says, “we will have to think harder about the future.”