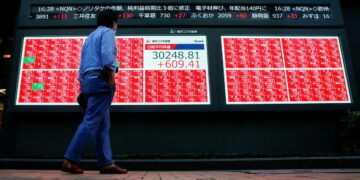 SYDNEY, Nov 29 (Reuters) – Asian markets were trying to regain some composure on Monday as the spread of the Omicron variant in developed nations threatened to derail economic recoveries and the tightening plans of some central banks.

Oil prices also recouped some losses after Friday’s shellacking, while the safe haven yen took a breather after its run higher.

The new variant of concern was found as far afield as Canada and Australia as more countries imposed travel restriction to try to seal themselves off. read more

Britain called an urgent meeting of G7 health ministers on Monday to discuss developments on the virus, although a South African doctor who had treated cases said symptoms of Omicron were so far mild.

“There is a lot we don’t know about Omicron, but markets have been forced to reassess the global growth outlook until we know more,” said Rodrigo Catril, a market strategist at NAB.

“Pfizer expects to know within two weeks if Omicron is resistant to its current vaccine, others suggest it may take several weeks. Until then markets are likely to remain jittery.”

Trading was erratic early on Monday but there were signs of stabilisation as S&P 500 futures added 0.4% and Nasdaq futures 0.5%.

Both indices suffered their sharpest fall in months on Friday with travel and airline stocks hit particularly hard.

Nikkei futures were trading firmer at 28,370, though that was still below Friday’s cash close of 28,751.

MSCI’s broadest index of Asia-Pacific shares outside Japan (.MIAPJ0000PUS) was down 0.2%, but with few markets yet open.

Bonds gave back some of their gains, with Treasury futures down 11 ticks. The market had rallied sharply as investors priced in the risk of a slower start to rate hikes from the U.S. Federal Reserve, and less tightening by some other central banks.

Two-year Treasury yields dived 14 basis points on Friday to 0.50%, the biggest drop since March last year, while Fed fund futures pushed the first rate rise out by a couple of months.

The shift in expectations undermined the U.S. dollar, to the benefit of the safe haven Japanese yen and Swiss franc.

European Central Bank President Christine Lagarde put a brave face on the latest virus scare, saying the euro zone was better equipped to face the economic impact of a new wave of COVID-19 infections or the Omicron variant. read more

The economic diary is also busy this week with China’s manufacturing PMIs on Tuesday to offer another update on the health of the Asian giant. The U.S. ISM survey of factories is out on Wednesday, ahead of payrolls on Friday.

In commodity markets, oil prices bounced after suffering their largest one-day drop since April 2020 on Friday.

“The move all but guarantees the OPEC+ alliance will suspend its scheduled increase for January at its meeting on 2 December,” wrote analyst at ANZ in a note.

“Such headwinds are the reason it’s been only gradually raising output in recent months, despite demand rebounding strongly.”

Gold has so far found little in the way of safe haven demand, leaving it stuck at $1,785 an ounce .

What parents should know about the VR gear kids want