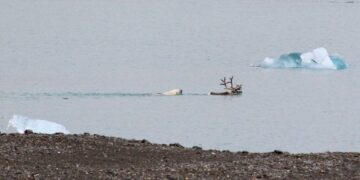 A research team from a Polish scientific station caught on camera a polar bear hunting a reindeer in Norway’s Svalbard archipelago.

A polar bear chases a reindeer into the water, drags it ashore and devours it, in a striking scene caught on film for the first time.

With sea ice melting, the king of the Arctic may be changing its diet.

The dramatic spectacle played out in Norway’s Svalbard archipelago on August 21, 2020—in summer, the sea ice retreats and takes with it the seals that make up the polar bear’s main source of food.

A research team from a nearby Polish scientific station watched it happen and caught for the first time on camera a polar bear hunting a reindeer.

The video shows a young female chasing a male reindeer into the icy waters, catching and drowning it, then pulling it on shore and making a meal of it.

“The whole situation was so amazing that it was like watching a documentary,” said Izabela Kulaszewicz, a biologist at the University of Gdansk.

“You could almost hear the voice of a narrator in the background saying that you absolutely have to watch this event because we will most likely never see anything like it again,” she told AFP.

Down to ‘modern media’ ?

The scene was so unusual that she co-wrote Polar Biology with two other researchers.

In it, they argued that the incident was one of a series of observations that suggest polar bears are increasingly preying on terrestrial animals to make up for their limited access to seals. 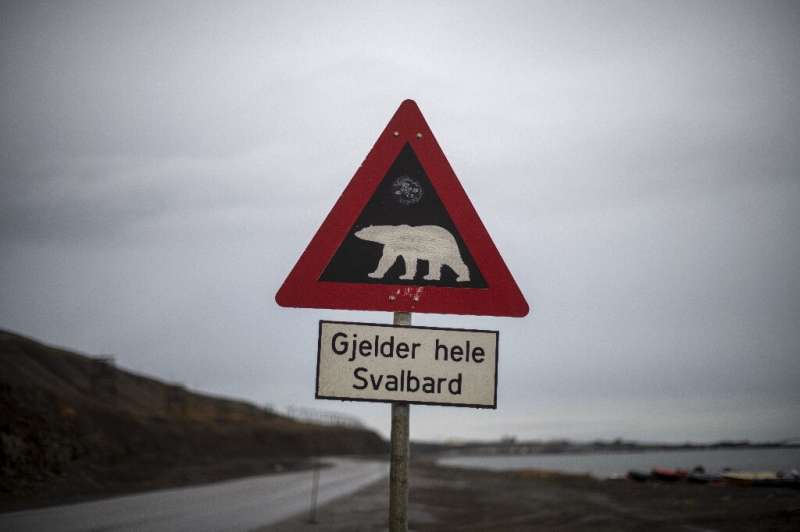 In Svalbard, just over 1,000 kilometres (620 miles) from the North Pole and where signposts warn of the danger of polar bears, some 300 sedentary bears live alongside around 20,000 reindeer.

According to the article’s authors, there are indications that polar bears have been hunting reindeer more frequently in recent decades.

They say that two factors are at play: the retreating sea ice is stranding the bears on land for longer periods, and the number of reindeer has been steadily rising on Svalbard since a 1925 hunting ban.

Eating reindeer is therefore a matter of both necessity and opportunity for the furry white beast, they suggest.

However, other experts caution against reading too much into the incident.

“If polar bears were killing reindeer back in the 1950s and 60s, it would have been very rare to have been seen, as there were few people, few bears, and few reindeer” in Svalbard at the time, said Andrew Derocher, a professor at the University of Alberta.

“Now, with modern media, everyone has a camera, social media and the ‘news’ spreads fast,” he added.

While high-fat, high-calorie ringed and bearded seals make up their main diet, polar bears are also known to feed on eggs, birds, rodents and even dolphins.

Weighing between 70 and 90 kilos (155 and 200 pounds) as adults, reindeer would be a good complement for the bears during the lean summer period, which has grown longer due to global warming. 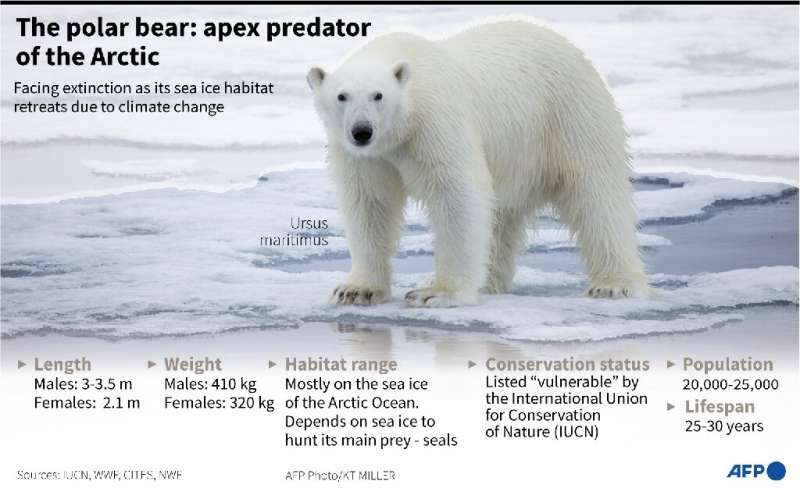 Key facts about the polar bear, apex predator of the Arctic.

Two days after the Polish researchers filmed their video, the same polar bear was observed devouring another reindeer carcass.

“Reindeer can be important, at least for some polar bears when they have to stay on land for extended periods,” said Norwegian expert Jon Aars, co-author of the article.

Experts note, however, that the new diet would not make a difference in bolstering the animal’s population size.

“While an occasional successful predation attempt on reindeer may be good in the short-term for an individual bear or two (and the media), I think there is little significance at the population level for either polar bears or reindeer,” said professor Ian Stirling, of the Canadian Wildlife Service.

Polar bears are strong swimmers—their Latin name is Ursus maritimus—but they can’t keep up with reindeer on long distances on land.

Elsewhere in the Arctic, caribou—as North American reindeer are known—are not as vulnerable as their Svalbard cousins, whose wariness seems to have dissipated since the hunting ban.

“I suspect that given the trend, the Barents Sea polar bear population—which includes Svalbard—is one that will disappear this century.”

This document is subject to copyright. Apart from any fair dealing for the purpose of private study or research, no
part may be reproduced without the written permission. The content is provided for information purposes only.

The avian flu is hammering U.S. poultry farmers, leaving consultants to ask: What has modified?

The solely HIV vaccine in a late-stage trial fails, a significant blow within the struggle towards the epidemic

Study suggests UK underestimates its methane emissions from oil and gasoline manufacturing; different nations most likely do as nicely