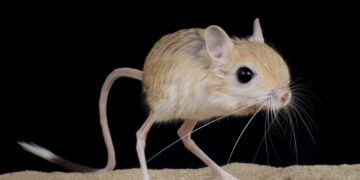 How the jerboa got its enormous feet | Science

How the jerboa got its enormous feet | Science

With its large ears and whiskered nose, you’d be forgiven for mistaking the jerboa for a mouse … at least from the stomach up. The animal’s legs are another story, with gigantic feet that enable it to hop like a kangaroo through hot desert environments in Africa and Asia. Now, researchers say they may have figured out how these stunning appendages evolved.

The insight comes thanks to a comparison of the “transcriptome”—essentially the sum total of all of the genes being used at a given time by an organism—from mice and jerboas, creatures separated by about 55 million years of evolution. Researchers started with an appendage that’s similar between the two: their forelimbs, or arms. By comparing the messenger RNA (mRNA) made by cartilage cells in developing mice and jerboas’ arms, the team aimed to establish a baseline set of genetic differences between the two animals that probably weren’t related to the jerboas’ big feet. (To make a protein, an active gene first makes an mRNA “transcript.”)

Then, the scientists looked at cartilage cells from the two animals’ growing feet. From those transcriptomes of mouse and jerboa feet, they were able to narrow the pool of potential genes tied to foot size down by 90%, leaving a total of 1755.

Finally, the researchers used a series of so-called network analyses to try to pinpoint which genes might have outsize effects in shaping the jerboa’s feet. Scientists have been cataloging genes, their function, and what chemical pathways they influence in the body for decades now. But nothing operates in a vacuum in the cell. Most every pathway is intertwined with others, and the end result is the product of many gene networks operating in parallel and individual genes that have many associations with others.

The total picture painted by the jerboa network analysis is one that highlights how complex the developmental process is. There is no one gene responsible for the rodent’s feet, but many different, overlapping networks of genes, the researchers report this month in Current Biology. “It’s like pulling on a ball of spaghetti,” says study author Kim Cooper, a developmental evolutionary biologist at the University of California, San Diego. “You pull on one spot and everything that’s connected to it is going to move, too.”

Still, there were some spaghetti strands that were particularly important. The team identified a gene called shox2, for example, that is expressed in the jerboa feet, but not in mouse feet. Shox2 makes a transcription factor, a protein that dictates what other genes are turned on or that specifies what part of a gene’s DNA is actually made into protein. Transcription factors can have huge cascading effects that change whole networks of genes, and shox2 has previously been shown in humans to be associated with diseases such as Turner syndrome, which causes short stature and disproportionate limbs.

Other genes with different expression in the jerboa were ones that are ordinarily associated with turning off bone growth in mice. This type of “cutting the brakes” approach seems to be another key component of the jerboa’s huge hindlimbs, the team reports.

The paper’s network analysis illustrates a new way of trying to understand the genetics behind a biological process, says Henry Kronenberg, an endocrinologist at Massachusetts General Hospital who specializes in bone development but who was not involved in the study. Most of our understanding of gene function relies on mutations and knocking genes out, he notes. Here, however, the authors have leveraged the evolutionary changes between two animals to try to uncover the genes involved in a physical difference, he says. “I thought it was quite a virtuoso performance.”