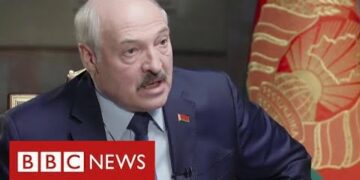 Belarus’s authoritarian chief Alexander Lukashenko, has stated that he won’t cease the move of 1000’s of migrants by his nation as they attempt to enter the European Union.

In an unique interview with the BBC, Lukashenko admitted that his armed forces may very well be serving to migrants breach the heavily-guarded border with Poland.

Thousands of individuals, many of the them from the Middle East, have travelled to Belarus and been transported to the border with Poland within the hope of gaining entry to the EU.

Ben Brown presents BBC News at Ten reporting by Steve Rosenberg who spoke to Alexander Lukashenko on the Presidential palace in Minsk.

Russia oil manufacturing is at pre-war ranges due to China and India: Larry Kudlow

Why Iranians have been queueing for rooster – BBC News

They assume the world revolves round DC: GOP congresswoman

Goldman Sachs' new CEO has lots of work to do